Epic and magnificent Rome is waiting for tourists

Rome, situated on the Tiber River, is one of the oldest cities on our planet. The capital of Italy was the main centre of the Roman Empire during the period of Antiquity. There are hundreds of legends and tales about the city; it is mentioned in many famous works of ancient authors. Low budget vacation in Rome will impress you and increase your vitality.

Rich history of the capital city

Romulus and Remus are believed to be the founders of Rome. The most likely date of the foundation of Rome (there are many guesses) is the 21st April 753 BC. It is traditionally believed that Rome was ruled by seven emperors.

With the help of Gaius Julius Caesar the city, and the country as well, began to grow and develop. When Nero ruled Rome, the city suffered from a great fire and the city had to be reconstructed. It was exactly after the Big Fire when the Colosseum was built.

The architecture of the city was seriously damaged in VI–VIII centuries. Ancient buildings were slowly collapsing, despite some feeble attempts to restore them. During the Napoleon times Rome was occupied by the French troops. The Papal government was abolished. In 1929 another important event happened. The Vatican City, an independent state within the city of Rome, was established.

During the World War 2 the city was occupied, but it managed to survive.

Modern Rome is as beautiful as the ancient one thanks to numerous well-preserved ancient buildings. The most famous of them are the Roman Forum, the Pantheon, the Colosseum, the Imperial Fora, the Saint Angel Castle and others.

Vacation in Rome gives you a chance to take a glance at the wonderful St. Peter’s Basilica, the Navona Square, the Spanish Steps, the Trevi Fountain, the Villa Borghese. You can’t stay indifferent to the last minute deals to Rome because they give you a great chance to visit the Capitoline Museum, the National Museum of Rome, the Centrale Montemartini and others.

Vacation in Rome is a trip to an absolutely different world, where sunny days and bright colours fill your body and soul with new energy. The unique places of cultural and historical heritage in Rome are the Holy Stairs, the Palatine Hill, the Fountain of Four Rivers, the Altar of the Fatherland, the Forum of Caesar, the Fontana della Barcaccia, the Palazzo di Venezia, the Catacombs of Rome, the Basilica di San Giovanni in Laterano, the Column of Marcus Aurelius and others.

Low budget vacation in Rome gives you an opportunity to learn more about ancient philosophy, literature, astronomy. Football fans will be thrilled to buy low budget vacations to Rome, because here they can find the famous Roma football club.

Last minute deals to Rome are a good chance to visit this city, the heart of culture, finance and politics of Italy. Vacation packages to Rome are always very popular because there are lots of places to visit. There are around 900 churches and many universities, such as the Pontifical University of St. Thomas Aquinas, the Roma Tre University, the National Academy of Saint Cecilia and others.

Vacation costs may vary. Our website gives you a chance to spend a vacation in Rome on a low budget. Don’t waste your time and make your dreams come true!

Original prices suggested by the hotels and airlines in Roma

april of air +18 °C
Рассчитай Отель + Авиа in Roma, Italy
in Roma, Italy for 8 days
£210
flight and accommodation for 1 person 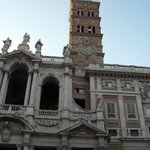 We were staying across the street and I noticed that there was short line in the mornings but not later in the day. It iswell worth a wait especially if you want to walk through th next... e Holy Door. Try not to miss this More on TripAdvisor

Subscribe to the newsletter and be the first to learn about more trips at attractive prices
© 2020 ??TripVariator??