Gdansk, the capital of Baltic amber!

Vacation in Gdansk, the city with its age-old traditions of amber processing, will give you a chance to dive into the atmosphere of a fairy tale with lots of impressions and adorable souvenirs. Vacation in Gdansk won’t break your budget, and at the same time you can experience unforgettable emotions because of the mixture of many ethnic cultures. For many centuries Gdansk had been the major trading point between northern and western, eastern and central Europe. Gdansk, a city with the population of around 500 000 people, is the sea capital of Poland. Gdansk has a ferry connection to Sweden and Denmark. No doubt, your vacation in Gdansk will become one of the most memorable trips.

Gdansk was first mentioned in the chronicles in 997. In 1308 the city was occupied by the Teutonic Knights. Later Gdansk was joined to Prussia and renamed to Danzig. Half a century later the city became the major member of the Hanseatic League (trade union). It was not the last time in the history of Polish Gdansk that it became German Danzig and vice versa. The most dramatic events happened in 1939 when Poland refused to give the city back to the Hitler’s Germany. That was the reason for Germany to start the World War 2. That’s why a vacation in Gdansk gives you an opportunity to visit both Poland and Germany at once.

Vacation in Gdansk. Picturesque places of the flamboyant city

There are lots of places to visit in the city even for the most demanding travelers. Low budget vacation in Gdansk offers you to visit the Old Town the architectural complex of the XIII–XVIII centuries. You will be impressed by the biggest brick church in Europe - the St. Mary’s Church, the Royal Way with the Golden Gate and the Long Market Square with the monuments of the Renaissance. You will be even more impressed by the low vacation costs.

Last minute deals to Gdansk give you a chance to make a trip to an environmentally friendly city, with beautiful nature. It is a very friendly and welcoming city on the southern shore of the Baltic Sea, surrounded by the Tri-City Park, hills and lakes of the Kashubian Switzerland!

Last minute deals to Gdansk give you a chance to take a walk along the ancient trees in the famous Oliwa Park and the Culture Park of the City Fortifications - 'Gdańsk Fortress' . You can also visit the national park on the Sobieszewska Island.

Low budget vacation to Gdansk will give you a chance to visit the Maritime Museum with the symbol of the city, the port crane Zhurav and the shipyard. It was the Gdansk shipyard where Leh Walesa, the future President of Poland, worked as an electrician.

Without doubt, low budget vacations in Gdansk enrich your social and emotional experience, give you a chance to have a great time and learn something new. If you book a vacation to Gdansk on our website, you will enjoy walking along fascinating streets with historic past. Swimming in the sea and sailing will charm you. Unforgettable and cheap vacation in Gdansk offers you comfortable hotels, exquisite restaurants and romantic cafes. Vacation costs are low. Book your vacation on our website and enjoy your trip to the heart of Europe!

Original prices suggested by the hotels and airlines in Gdansk 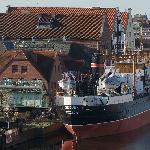 My daughter and I visited the old town on the recommendation of friends. It is really lovely, with lots of nice restaurants, cafes and bars. The atmosphere is relaxed and friendly. next... I cant wait to go back. More on TripAdvisor