The city of lions. A popular tourist destination!

You should visit Lviv in order to know the true nature of the west part of Ukraine. What attracts in this city is its rich history, unique architecture and unsurpassed charm. It is here where you can feel the beauty of Ukrainian national culture.

Lviv cannot be compared to any other city in the world thanks to its authenticity . The historic centre of the city is a UNESCO World Heritage Site. Here you can find a great number of cultural and historic landmarks. Low budget vacation in Lviv will bring unforgettable impressions! р>

Main events in the history of Lviv

Daniel of Galicia was the founder and the first prince of Lviv. According to the legend, the ruler named the new city in honour of his son Lev. The history of the city begins in the middle of the XIII century. Later the city was conquered many times, that’s why most of the time Lviv was under the rule of the western neighbours: the Austro-Hungarian Empire and Poland. In 1939 Lviv became part of the USSR. Today vacation in Lviv is a wonderful opportunity to visit the main western city of the independent Ukraine.

Even the most experienced tourists will be interested to visit the famous landmarks in Lviv. More than 40 museums are waiting for the owners of low budget vacation packages to Lviv. The most popular museums are the Lviv Art Gallery, the National Museum, the Lviv History Museum, the Arsenal Museum, the Pharmacy Museum, the Museum of Ethnography and Crafts, the Memorial Museum and others.

Low budget vacation in Lviv won’t be complete without visiting the local opera house that is famous in the whole country and depicted on the 20 hryvnia banknote. Low budget vacation in Lviv is a great chance to visit the Skarbek Theatre. In 1842 (the year when it was opened) it was the third largest theatre in Europe. The cultural centres of the Lviv musical life are the Lviv House of Organ and Chamber Music, the Lviv Philarmonic, the Lviv Theatre of Opera and Ballet.

You have a chance to see the beauty and architecture of religious sites represented in cathedrals and churches with your own eyes.

Sports fans will enjoy their visit to Lviv as well. They have a chance to watch the match with FC Karpaty and feel the heat of emotions, thanks to the devoted football fans of Ukraine. Last minute deals to Lviv will impress tourists who like gourmet coffee and chocolate. You can find these goodies almost everywhere in the city.

Vacation in Lviv won’t break your family budget if you use our website. Vacation costs on our website are so low, that you will forget about everything and start packing your bags!

Original prices suggested by the hotels and airlines in Lviv

may of air 0 °C
Рассчитай Отель + Авиа in Lviv, Ukraine 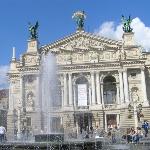 This may be one of the most beautiful opera houses in the world. It is beautiful during the day and fantastic at night due to the lighting. The facade is wonderful and you can sit next... in a nearby street cafe under ballerina umbrellas ( incredible imagina More on TripAdvisor